The show begins with a sweep up Patty’s hot bod. She’s in bra, panties and heels and picks up two dresses. She turns and asks the guy on the bed enjoying the view which dress he wants to see her try on. He chooses pink. Patty doesn’t just throw it on. She slips into it seductively. Here’s a babe who knows how to build it up.

As soon as Patty’s in that dress, Max has her in the bed and is helping her get out of it. Putting Patty on her hands and knees, he peels off her thong and licks her pussy from behind. She helps him get deeper into her pussy by pulling open her ass cheeks.

Patty told us that getting her pussy tongued satisfies her best of all so the clit action that she’s receiving here makes her wet and gets her squirming with pleasure. She takes off her bra so she can fondle her big tits and rub her nipples while his head is busy between her legs.

Patty is a girl who gives as good as she gets from a guy. After all, this is a chick who gave a dude a blow job while upside-down on a stripper pole in a club in her very first sex scene. She gets back on her hands and knees and gives Max a hands-free, spit-drenched, deep-throat blow job that’ll give him something to write home about. It’s suckin’ spectacular.

Patty wants the big boy plunging into her. They fuck so hard, they could use seat belts to keep them from falling off the bed. 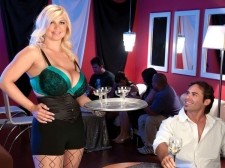 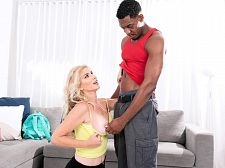